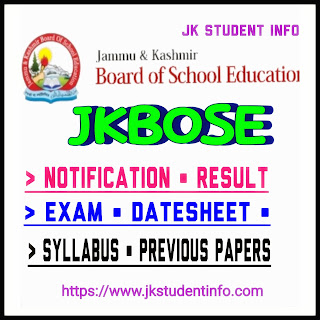 Srinagar, Feb 07 (GNS): J&K Board of School Education on Monday set to rest rumours about the results pertaining to Class 12th of Kashmir division being announced today, saying that no date for declaration for the same has been finalized hitherto.

A top official of J&K BOSE while talking to GNS said that the dates for the declaration of results of Class 12th as well as 10th standard are yet to be finalized. “We request students not to pay heed to rumours,” the official said.

The official, however, said that result will be declared soon. “It may still take a few days. There are certain modalities to be completed and once everything is done, results would be announced”. (GNS)

Follow to get all the latest updates of Kashmir University, JKBOSE, CUK, CUS, IGNOU , JKSSB etc. Get Study Materials, Previous Year Papers, PDF Notes, Syllabus here. Scroll the page and follow us on social media
#Results