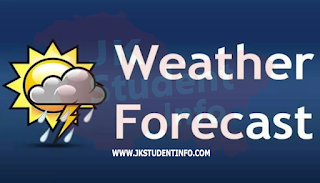 Srinagar: As forecast by the meteorological department, Jammu and Kashmir is all set to receive more rains and snow till November 11. With overnight cloud cover, there was some increase in minimum temperature on Wednesday but stayed below freezing point in Gulmarg which also received fresh snowfall of 2cms in the last 24 hours.

“Light to moderate rain/snowfall (over higher reaches) is expected at many places from today evening to November 11th forenoon,” said a meteorological department official here. However, he said, there was no forecast of any major rain or snowfall during the spell.

From November 12-16, he said, the weather is expected to be “fair to partly cloudy”.

Regarding probable impacts, he said, snowfall and low temperature may lead to temporary disruption of surface transportation, mainly over Zojila, Jammu-Srinagar Highway, Leh-Manali road on November 10 and 11.

“Prior to embarking on journey, people are advised to know the status of the road from traffic police to avoid inconveniences,” he said, adding, “Travellers on major passes are advised to carry sufficient food items, warm shoes, clothes etc with them as road conditions remain uncertain during inclement weather.”

In the last 24 hours till 0830 hours today, the MeT official said Pahalgam received 0.5mm of rainfall while Gulmarg amassed 2cms of fresh snowfall.

Follow to get all the latest updates of Kashmir University, JKBOSE, CUK, CUS, IGNOU , JKSSB etc. Get Study Materials, Previous Year Papers, PDF Notes, Syllabus here. Scroll the page and follow us on social media
#Weather